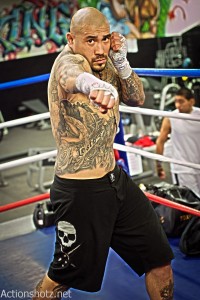 With an impressive 6-0 record in mixed martial arts fighting, many of Johnny Cisneros’ opponents have felt like the “Tattooed Terror” was everywhere at once. Proving them right and highlighting the growing global phenomenon of mixed martial arts, the Mixed Martial Arts Conditioning Association (MMACA) recently inked a new endorsement deal with Cisnero.

A professional mixed martial arts fighter since 2005, the Tattooed Terror has enjoyed a quick ascent through the ranks; he is also a blue belt in jiu jitsu, and has trained for more than five years in Muay Thai boxing. At 5’11” and 205 pounds, Cisneros is known as a strong and powerful striker and as an exciting, energetic and relentless fighter.

The Mixed Martial Arts Conditioning Association was developed to bridge the gap between fitness training, sports conditioning science, MMA training methods, and direct application from the ring, octagon, mat or cage. MMACA training concepts can also be applied to the fitness enthusiast interested in an intense and effective mixed martial arts workout.

“Johnny is an amazing fighter and ambassador for the world of mixed martial arts, and we are proud to provide support for his rapid rise to the top of the ranks in professional MMA,” said John Spencer Ellis, founder of the Mixed Martial Arts Conditioning Association. “Johnny represents the association’s tough side, and yet he is incredibly cool and soft-spoken. We are huge fans of his style and his skill.”

Cisneros’ well-known work ethic in the gym has allowed him to train with some of the most respected fighters in the mixed martial arts community, such as Mike “Joker” Guymon, James “Lightning” Wilks and Mark “The Philippine Wrecking Machine” Munoz.